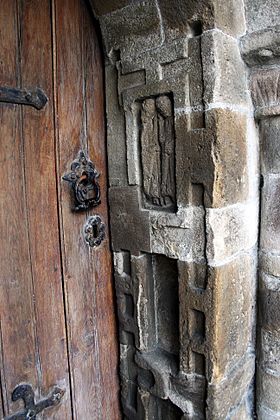 The St. Lachtain's Church was built in 1731 in the centre of the village of Freshford, County Kilkenny in Ireland on the R693 regional road. It incorporates a portal from 1100 as its main entrance.

St. Lachtain died in Donoughmore, County Cork in 622 AD. It is almost certain that a church was built on the present site after 622 AD. The Danes (also known as Vikings or Norsemen) robbed it of its gold and silver ornaments and burnt all its books.

The church was replaced in 1100; however all that is left of the 1100 church is the beautiful Hiberno-Romanesque (Irish-Roman) architectural porch and doorway. The remainder of the present church was built for Protestant worship in 1731. The arch bears a prayer in old Irish writing:

In St. Lachtain's time Freshford was a diocese. In 1225 a Bishop's palace was built at Aghore (Achadh Ur), now Uppercourt. It was used as a summer residence for over 300 years.

The sandstone Romanesque portal is deemed a National Monument.

All content from Kiddle encyclopedia articles (including the article images and facts) can be freely used under Attribution-ShareAlike license, unless stated otherwise. Cite this article:
St. Lachtain's Church, Freshford Facts for Kids. Kiddle Encyclopedia.