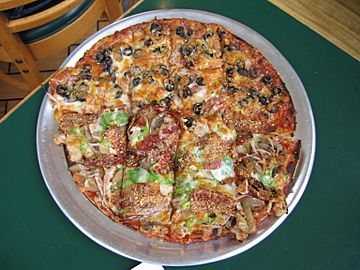 St. Louis cuisine is the culinary culture of the Greater St. Louis area, which comprises and completely surrounds the independent city of St. Louis (its principal city) and includes parts of both the U.S. states of Missouri and Illinois.

An independent city and a major U.S. port in the state of Missouri, St. Louis dates to an early French settlement in 1764. Built along the western bank of the Mississippi river, which marks the border of Missouri with Illinois, it was founded by French fur traders and Pierre Laclède and Auguste Chouteau, and named after the medieval French King, Louis IX.

Spain took control of the region after defeating France in the Seven Years' War in 1764. France regained control in 1800, but sold it to the United States three years later in the Louisiana Purchase.

St. Louis grew quickly in the 19th century, becoming America's fourth-largest city by 1904, when it hosted the Louisiana Purchase Exposition and the Summer Olympics.

A number of foods are specific to, or known to have originated in St. Louis.

St. Louis has a variation of pizza known as St. Louis-style pizza, which features provel cheese, a very thin crust, and is often square cut. 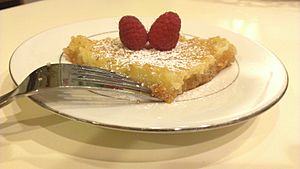 A slice of gooey butter cake, garnished with powdered sugar and raspberries

Gooey butter cake is a type of cake traditionally made in, and invented in, St. Louis. It is served locally as a breakfast pastry, though also served as a dessert. 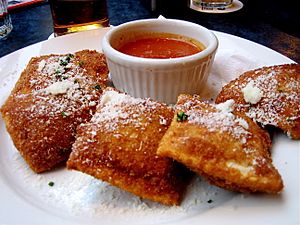 Toasted ravioli, from The Hill

Toasted ravioli may have originated in Sicily, where fried ravioli containing a sweet filling is a traditional Christmas time dish, commonly referred to as "meat pillows". However, most accounts of the first toasted ravioli can be traced to the Italian neighborhood, known as "The Hill", of St. Louis, Missouri, in the United States.

Many claims have been made as to the original creation of toasted ravioli in the United States. One account attributes it to Oldani's in St. Louis. The restaurant was located where Mama's "On The Hill" restaurant is now, on the St. Louis Hill at 2132 Edwards Street.

As the story goes, the delicacy was stumbled upon when a ravioli from wholesaler Mama Toscano's was accidentally dropped into the fryer by Chef Fritz. "Mickey Garagiola, older brother of Major League Baseball Hall-of-Famer Joe Garagiola, was actually at the bar during the mishap and was the first to taste the accidental treat."

Shortly after, the item began appearing on menus across "The Hill" neighborhood of St. Louis. Meanwhile, many chefs on The Hill stake their own claims.

Another popular claim revolves around Charlie Gitto's "On The Hill" restaurant (then known as "Angelo's"). According to that tale, in 1947, a chef at Angelo's accidentally dropped the pasta into oil instead of water.

All content from Kiddle encyclopedia articles (including the article images and facts) can be freely used under Attribution-ShareAlike license, unless stated otherwise. Cite this article:
St. Louis cuisine Facts for Kids. Kiddle Encyclopedia.