St. Marys Junction station was a Grand Trunk Railway station located one kilometre north of St. Marys, Ontario. It operated as a train station from 1858 until 1941, and remained in service for non-passenger functions until the 1970s. 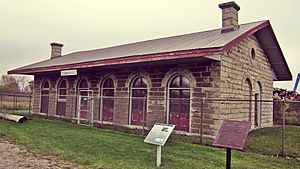 The station building in 2017

The station building was designed according to the standard Grand Trunk Railway 'A First Class Way Side Station' plan developed by British architect Francis Thompson.

The passenger facilities consisted of a ticket area, a luggage room and separate 'ladies' and 'gentlemen' waiting rooms.

St. Marys station opened in 1858 as the western terminus of the Grand Trunk Railway line from Toronto, located fully outside the town of St Marys. The Town of St. Marys opposed the selection of such a remote station location, instead recommending a location near the town centre.

The Grand Trunk Railway was extended west to Sarnia in 1859 and south to London in 1860, with the two branches meeting at St. Marys station. As a result, St. Marys station became St. Marys Junction and the station building became the control point for the switches at the rail junction.

The station was closed in 1941, but the building continued to be used for non-passenger purposes until the 1970s.

All content from Kiddle encyclopedia articles (including the article images and facts) can be freely used under Attribution-ShareAlike license, unless stated otherwise. Cite this article:
St. Marys Junction station Facts for Kids. Kiddle Encyclopedia.