St Andrew's is a parish church in Castle Combe, Wiltshire built in the 13th century with additions in later centuries. It was restored due to structural concerns in the 19th century. It is a Grade I listed building.

The structure of the church mostly originates from the 15th century, but includes some extant 13th century work in the chancel and 14th century work in the chapel. The building is composed mainly of rubble stone and ashlar, with a stone tile roof. There is a tower on the west side of the building on which construction begun in 1434. The tower has many features of a late medieval church including pinnacles, diagonal buttresses and battlements. The interior of the church consists of a nave, chapels to the northeast and southeast, aisles and a south porch. 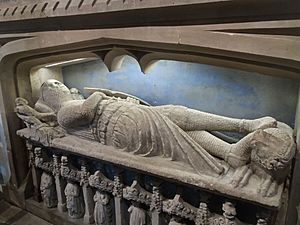 Within the Lady Chapel there is a late Norman memorial dedicated to a Baron of Castle Combe, Walter de Dunstanville (d. 1270). The effigy is cross legged indicating Dunstanville served in the crusades.

In recent years there have been a number of restoration projects for the church, with work being completed to the roof and medieval screen in 2016 and 2018 respectively.

There is an operational medieval faceless clock at the base of the tower.

There are a number of tombs, memorials and monuments in the churchyard, 25 of which are Grade II listed.

The church is part of the Bybrook Team Ministry and is still actively used for worship.

All content from Kiddle encyclopedia articles (including the article images and facts) can be freely used under Attribution-ShareAlike license, unless stated otherwise. Cite this article:
St Andrew's Church, Castle Combe Facts for Kids. Kiddle Encyclopedia.