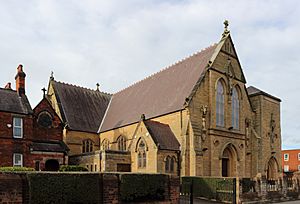 It was built for the Oblates of St Mary Immaculate by Peter Paul Pugin and Cuthbert Pugin to designs by their brother Edward Welby Pugin - Edward had planned a south-west tower but this was never built. Its foundation stone was laid on 9 May 1875 by James Brown, Bishop of Shrewsbury and the church was opened on 28 October 1877. A presbytery was added between 1884 and 1885 and side aisles in 1934. The parish was served by the Oblates until it transferred the church to the Diocese of Shrewsbury in September 2010. The parish is currently served by Fr. Bernard Forshaw and Rev. John Boggan.

All content from Kiddle encyclopedia articles (including the article images and facts) can be freely used under Attribution-ShareAlike license, unless stated otherwise. Cite this article:
St Anne's Church, Rock Ferry Facts for Kids. Kiddle Encyclopedia.