Built into the side of a limestone cliff, the building measures 20 by 12 feet (6.1 m × 3.7 m) with walls constructed from limestone, and consists of two chambers, one in the front and one in the back. The majority of the chapel was built in the thirteenth century, although parts of it may date back further to the sixth century when Saint Govan, a monk moved into a cave located on the site of the chapel. One legend suggests that Saint Govan is buried underneath the chapel's altar, located at the east end of the building. The entrance to the building is via. a doorway on the north side, low stone benches run along the north and south walls and an empty bell-cote is located at the west end. The slate roof is suspected to be a modern addition compared to the rest of the building.

The building is accessible from the clifftop by climbing down a set of 52 stairs, although tourist organisations propagate the legend that when counted, the number of steps differs between going down and going back up. 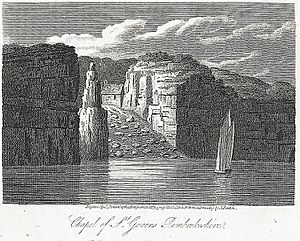 The building was listed with Grade I status on August 2, 1996. The chapel is within the Castlemartin Military Training Area and is sometimes inaccessible.

All content from Kiddle encyclopedia articles (including the article images and facts) can be freely used under Attribution-ShareAlike license, unless stated otherwise. Cite this article:
St Govan's Chapel Facts for Kids. Kiddle Encyclopedia.