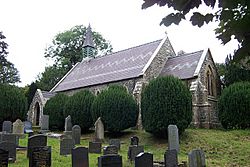 St John's Church, Trofarth, is a redundant church standing in an isolated position in Conwy County Borough, Wales . It was designated as a Grade II listed building on 2 July 1998.

It was built in 1873 as an Anglican church to a design by Sir George Gilbert Scott and consecrated on 19 June that year. A small church with lancet windows, it consisted of a nave, a small chancel, a south porch and it had a bellcote at the west end. It was restored in 1899 by the Chester firm of architects, Douglas and Fordham, who added a vestry at the northeast and an organ chamber, and increased the size of the chancel by extending it into the nave. At the same time the internal plaster was removed and replaced by a veneer of limestone, and furnishings designed by Douglas were added.

In January 2009 permission was obtained for the building to be converted for domestic use.

There is a churchyard to the west side of the redundant church. Burials include:

All content from Kiddle encyclopedia articles (including the article images and facts) can be freely used under Attribution-ShareAlike license, unless stated otherwise. Cite this article:
St John's Church, Trofarth Facts for Kids. Kiddle Encyclopedia.