St Laurence's College (known colloquially as Lauries) is a private Catholic school for boys located in South Brisbane, Queensland, Australia. It was founded by the Christian Brothers in 1915. As of 2021, the college has an enrolment of over 2100 students from Year 5 to Year 12. St Laurence's is a College in the Edmund Rice Tradition. St Laurence's is currently associated with the Associated Independent Colleges sporting association.

Some of the college's historic buildings are listed on the Brisbane Heritage Register. 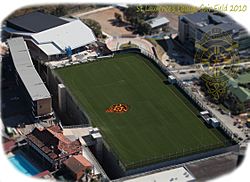 The college was officially opened and blessed on Sunday 11 July 1915 by the Roman Catholic Archbishop of Brisbane James Duhig. The school was operated by the Christian Brothers. On the first day there were 270 students and a staff of five teachers. The monastery for the Brothers was built in 1917.

Since 1961, the school has also operated sporting fields in the southern Brisbane suburb of Runcorn, which contains 8 playing fields and a function centre.

In 1977 the school established an outdoor educational facility, Camp Laurence, at Lake Moogerah, to the west of Brisbane.

In 1994 a College Board was established as an advisory group for the principal. In 1996 the first lay principal, Mr D Frederiksen, was appointed with the Christian Brothers retaining ownership and control of the College. The last of the brothers left the monastery in 2009, and the building was converted in 2010 into the school's administration building.

In 2010, as part of an agreement with the adjacent Mater Hospital Brisbane, the school's land was leased for 25 years to build a six-storey car park, which now houses the college's synthetic oval on top along with a 1500 seat auditorium.

Entertainment, arts and the media

All content from Kiddle encyclopedia articles (including the article images and facts) can be freely used under Attribution-ShareAlike license, unless stated otherwise. Cite this article:
St Laurence's College Facts for Kids. Kiddle Encyclopedia.