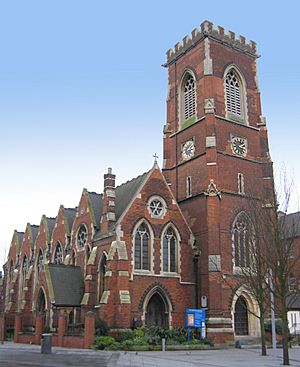 St Mary's Church is a Church of England parish church in Acton in the London Borough of Ealing. The present church, in red brick with stone dressings in a decorated style, was designed by Horace Francis and constructed 1865–1867. The church was listed Grade II in 1981.

The church is dedicated to St Mary of the Visitation.

A church dedicated to St Mary in Acton was first recorded in 1231. The medieval church was altered and repaired several times over the centuries.

In 1642, the church was damaged by Roundhead soldiers after the Battle of Turnham Green: the font was defaced, windows smashed, the chancel rails taken into the street to be burnt, and most of the memorial brasses destroyed. They also set fire to the rectory outbuildings, objecting to the ceremonial practice of the rector, Daniel Featley. Featley, a Calvinist anti-Laudian but a royal chaplain and a defender of the Church of England, twice escaped assassination, and was ejected from the living of Acton in 1643. Featley and his replacement Philip Nye were both members of the Westminster Assembly, Featley arguing for episcopalianism (the existing system of church governance by bishops), Nye arguing for congregationalism (autonomous churches).

To meet the needs of a growing local population, the church was remodelled in 1837, then demolished (except the tower) in 1865 and completely rebuilt in 1865–1867. The new church was consecrated on 16 May 1866 by Samuel Wilberforce, Bishop of Oxford. In 1876, the tower was rebuilt, paid for by Frederic Ouvry in memory of his sister, and a new clock was installed.

The parish is in the Deanery of Ealing, in the Archdeaconry of Northolt, in the Willesden Episcopal Area of the Diocese of London.

Several memorials survive from the old church, including those to:

All content from Kiddle encyclopedia articles (including the article images and facts) can be freely used under Attribution-ShareAlike license, unless stated otherwise. Cite this article:
St Mary's Church, Acton, London Facts for Kids. Kiddle Encyclopedia.