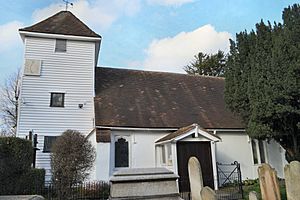 St Mary's is a 12th- or 13th-century English re-used church building, during its religious lifetime dedicated to St Mary, in the London suburb of Perivale. It was the smallest of Anglican churches in the dissolved county of Middlesex, excluding the City of London. It became separated from almost all of its parish's population by the development and heavy traffic on the A40 trunk road so that the parish was dissolved and church disbanded in 1972. It was adopted by a charitable organisation formed from the local community, the Friends of St Mary, and it functions as an arts centre, holding local exhibitions and performances of classical music.

The church is built of rag-stone and flint, and its tower is unusual, being clad in white weatherboarding. It contains a chime of three bells, all cast in 1949 as a World War II memorial for the war dead of the community and small parish as a whole.

All content from Kiddle encyclopedia articles (including the article images and facts) can be freely used under Attribution-ShareAlike license, unless stated otherwise. Cite this article:
St Mary's Perivale Facts for Kids. Kiddle Encyclopedia.