St Patrick's Church is a Roman Catholic Parish church in the Cowgate part of Old Town, Edinburgh, Scotland. It was built from 1771 to 1774, and became a Catholic church in 1856. The facade of the church was designed by Reginald Fairlie in 1929. It is situated between South Gray's Close and St Mary's Street north of Cowgate and south of the Royal Mile. It is a category B listed building. 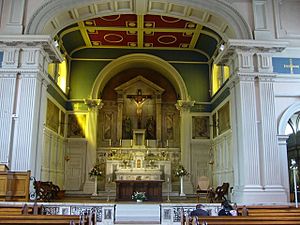 Designed by John Baxter, the original church was built from June 1772 to 1774 as a place of worship for the Scottish Episcopal Church. In 1818, the church building became part of the United Presbyterian Church. The Scottish Episcopal Church commissioned Alexander Runciman to produce a series of murals for the church. These were installed but covered over by the Presbyterian congregation. The murals were then forgotten until Duncan Macmillan discovered the murals' existence during the 1960s. Since then, some of the murals have been recovered and remain on the east side of the apse and depict the Parable of the Prodigal Son, Elijah, Moses, Jesus and the Samaritan Woman, and the Ascension of Jesus. As of August 2018, the restoration of the murals remains underway.

In 1898, the sanctuary for the church was remodelled and a new high altar was installed. It was designed by James Graham Fairley. In 1921, the mortuary chapel was built in memory of the parishioners who died in World War I. From 1924 to 1925, two chapels were built in the church, the Lady Chapel and the Sacred Heart Chapel. In 1929, the front church facade was built. It was designed by Reginald Fairlie and included statues of St Patrick and St Brigid.

On 6 August 1875, Hibernian F.C. was founded in St Patrick's Church. The parish priest Fr Edward Joseph Hannan and Michael Whelahan from the parish's Catholic Young Men Society decided to create the football club. On 17 March 2013 (St Patrick's Day), a plaque commemorating this founding of the club was presented to the church by the Hibernian Supporters Club.

The church has two Sunday Masses; they are at 11:00am and 4:30pm on Sunday. The parish is part of a cluster with the nearby churches of the Sacred Heart, St Albert's, St Columba's, St Peter's and St Mark's.

All content from Kiddle encyclopedia articles (including the article images and facts) can be freely used under Attribution-ShareAlike license, unless stated otherwise. Cite this article:
St Patrick's Church, Edinburgh Facts for Kids. Kiddle Encyclopedia.