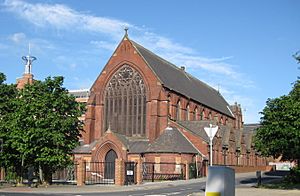 In 1889, building work started on St Patrick's Church on Rider Street. It was designed by John Kelly, who also designed All Saints' Church, Petersham, London, Sacred Heart Church, Teddington and St Patrick's Church, Soho Square. It was opened in 1891.

Leading up to April 2001, construction work began on a new St Patrick's Church on Torre Road in Leeds. When it was finished, the old one closed and the new one opened the next day. The original church was shut for asbestos yet remains and is now occupied by the West Yorkshire Playhouse and has East Street Arts located next to it.

All content from Kiddle encyclopedia articles (including the article images and facts) can be freely used under Attribution-ShareAlike license, unless stated otherwise. Cite this article:
St Patrick's Church, Leeds Facts for Kids. Kiddle Encyclopedia.