The Church of St Peter is a Church of England Grade II* listed church located on the east side of Wallsend, North Tyneside. It was constructed to replace Holy Cross Church, which had been built c. 1150 but had fallen into disrepair by the end of the eighteenth century. The building was extensively remodeled in 1892 in the Perpendicular style to give it its present form.The parish church oldest in Wallsend

By the 1790s the local authorities agreed a new church needed to be constructed, since Holy Cross Church, which had served the Wallsend community for centuries, had fallen into disrepair. With the only local church both roofless and unusable, services were instead being conducted in the local schoolroom. Progress was slow, however, with disagreements between Church and local property owners as to who should finance the construction, stalling the project until 1804. The matter was eventually resolved by a solicitor who suggested the money could be raised by means of a tontine. This unusual solution proved popular and ensured the necessary funds became available. 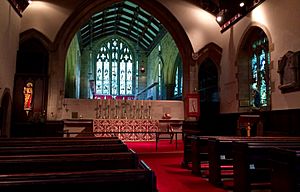 No work was undertaken however until 1806, when it was realised that the schoolroom being used for public worship was neither consecrated nor licensed —meaning that marriages were not legal, the offspring of the unions illegitimate and the perpetual curate subject to serious legal penalties. A Bill was passed in the House of Commons in August 1807 in order to legitimise the marriages and their offspring, and to authorise the construction of a new church. The foundation stone of what would be a Georgian 'preaching box' was laid in November 1807 and the burial ground was consecrated in 1809. Major alterations were made in 1892 to give the church its current form.

It was clear by the 1980s that the Victorian chancel had serious structural problems, and questions were raised with regard to the feasibility of making the necessary repairs. At one point the church was threatened with closure. But during Fr Alan Clements's tenure (1995-2001) substantial grants were secured from English Heritage and the Heritage Lottery Fund. These enabled the chancel to be given robust foundations and all the attendant repairs to be made. The scheme entailed turning the chancel into a church hall, the Lady Chapel into a sacristy, and the vestries into a kitchen and cloakrooms. In 2001 The parish was amalgamated with that of St Luke, Wallsend into a single parish.

In the early years of Fr Armstrong's incumbency (1830-1871) the thinking of the Oxford Movement began to shape the life of the church, albeit strongly resisted initially by some parishioners. He was accused of having 'an exaggerated idea of the priesthood' and 'more zeal for ceremony than for vital religion'—both common accusations against clergy who accepted Tractarian thinking. But his determination over forty years laid the foundations on which his successors would build. The church maintains the tradition of Anglo-Catholicism today.

One of the most notable features of the church is its collection of vivid stained glass by members of the Tower of Glass movement of the early 20th century.

In 2017, Thomas Denny made and fitted the 'Stella Maris' window in the westernmost window on the south side of the nave. It is a belated thanksgiving for the church's bicentenary in 2009, paid for entirely by fundraising and gifts. It was dedicated on 6 May, the feast of St Eadfrith 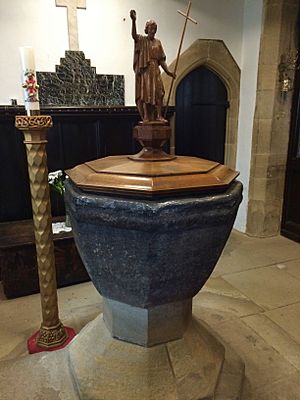 The font from Holy Cross Church

The font originally stood in Holy Cross Church, and would have been use by monks from Jarrow to baptise babies born in Wallsend. At some point after Holy Cross was abandoned the font found its way into Wallsend Burn (the stream which now forms the parish's northern boundary). It was rescued from there at some point in the 1800s and taken to Carville Hall, and eventually given to St Peter's by Mr Wigham Richardson in 1891. 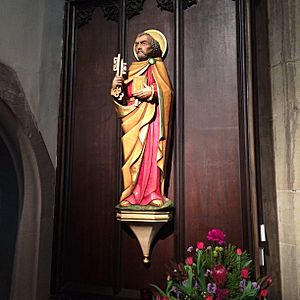 The statue of St Peter

The pipe organ is a Harrison & Harrison instrument of the Thomas Harrison period (1892).

The image of St Peter the Apostle to the north of the High Altar was commissioned by Fr Peter Strange.

Outside is a set of stocks, originally installed to discourage Sabbath-breaking. They are occasionally used for novelty wedding photographs.

Buried in unmarked graves in the churchyard are many victims of mining disasters, with memorial plaques commemorating both the Heaton Main Colliery Disaster of 1815 and the Wallsend Colliery Disaster of 1835. There is also an old chest identified on Antiques Roadshow as Nonsuch Chest from. The 1580s built by immigrants and decorated with copies of plans from the palace Henry v111 built in Surrey it no longer exists but afew chest were known 1in the V & A and one in Southwark Cathedral both in much better condition than ours but at least it was saved from the tip! .

The souls of Wallsend were ministered to from an early stage by monks crossing the Tyne from St Paul's, Jarrow, one half of the Benedictine house of Monkwearmouth–Jarrow Abbey. From the Reformation until 1856 the parish priest was a perpetual curate, whereafter he became a titular rector by Orders in Council. The incumbent of the parish created by the amalgamation of Wallsend St Peter and Wallsend St Luke is its rector.

The former chancel is used for social gatherings, and can be hired by local groups.

All content from Kiddle encyclopedia articles (including the article images and facts) can be freely used under Attribution-ShareAlike license, unless stated otherwise. Cite this article:
St Peter's Church, Wallsend Facts for Kids. Kiddle Encyclopedia.