St Tysilio's Church is a medieval church in the village of Menai Bridge, Anglesey, Wales. The current building dates from the early 15th century and underwent renovations in the 19th century. It was designated as a Grade II* listed building on 14 February 1967.

Located on Church Island near Menai Bridge, St Tysilio's Church is dedicated to Saint Tysilio, who was renowned for establishing a sanctuary on Ynys Suliau (also known as Ynys Tysilio). The current structure most likely dates to the early 15th century, with some renovations made in the 19th century. It was designated as a Grade II* listed building on 14 February 1967. 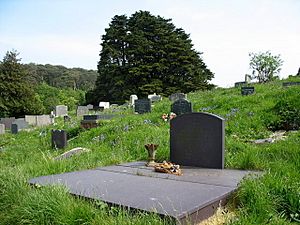 All content from Kiddle encyclopedia articles (including the article images and facts) can be freely used under Attribution-ShareAlike license, unless stated otherwise. Cite this article:
St Tysilio's Church, Menai Bridge Facts for Kids. Kiddle Encyclopedia.