Stable on the Strand facts for kids 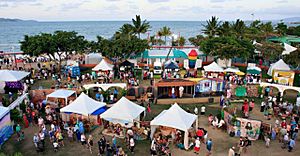 Stable on the Strand is an annual nativity play in Townsville, Queensland. It has been described as "part installation, part fun fair and part theatrical performance".

The play is staged from 18–22 December on The Strand in Townsville. The festivities also include a mock Bethlehem with actors playing soldier, shepherds and the Holy Family The event attracts up to 40,000 visitors a year.

The Stable was created in the Mount Louisa youth centre in 1999 by Jay Goodwin and Anne Harley, and was attended by 120 people on the opening night. In 2002, it moved to the Strand and acquired its current name. The original baby Jesus was played by Lachlan Crossan.

The play is a interactive re-creation of the traditional Christmas story, S It depends on up to 1000 volunteers per year. In 2002, it was awarded the honour of Townsville's Event of the Year. 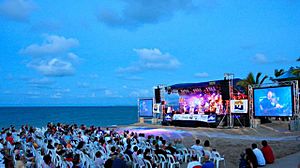 Live At The Strand right on the beach

All content from Kiddle encyclopedia articles (including the article images and facts) can be freely used under Attribution-ShareAlike license, unless stated otherwise. Cite this article:
Stable on the Strand Facts for Kids. Kiddle Encyclopedia.