The Strand, Townsville facts for kids

The Strand is a seaside foreshore located in Townsville, Australia. It is located in the suburb of North Ward. The Strand has a view of the Port of Townsville and Magnetic Island, as well as to Cape Cleveland. Features in the area include a jetty, a recreational park, restaurants, cafes and pools.

The Strand has been a part of Townsville's history since the city was founded in the mid-19th century. The current foreshore was opened in 1999 after the old foreshore was severely damaged and eroded after heavy rainfall and wind from Tropical Cyclone Sid in January 1998 and other monsoonal storms between 1997 and 1998. It was moderately damaged by Cyclone Tessi in April 2000.

The Townsville City Council and Queensland State provided an initial joint funding of around A$35 million for the development of the current foreshore. An estimated 80,000 people turned out on the opening weekend, which included numerous events including a pyrotechnics and fireworks display, and a skyshow.

The Strand was recently named Australia's cleanest Beach in 2008. This was the second time the award was given to the beach in five years. An Anzac Day march in 2009 attracted 20,000 people to The Strand.

Since the opening of the Strand, the foreshore has been used for many annual or monthly events. The fourth Friday of each month sees Strand Park used for Nightmarkets, which is a popular festivity among the local residents. Other events include the annual Townsville City Council Run Christmas events, Carols by Candlelight and Stable on the Strand, as well as a fireworks display and gathering on New Year's Eve. One example of a bi-annual event is the Strand Ephemera, wherein local and regional artists display their works along the foreshore. Some works from this event have become permanent on the foreshore, including the Silver Coconuts near the Rock Pool.

The Strand held the 2001 Centenary of Federation events, including a fireworks display and skyshow which attracted a crowd of around 86,000. The Strand was also the 'cauldron stop' for Townsville, during the Australian leg of the 2000 Sydney Olympics Torch Relay. 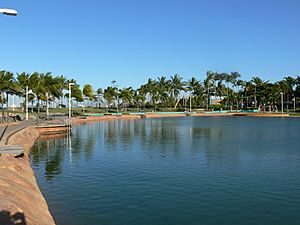 The Rockpool is a salt water lagoon at the Strand

Ten Things to do on the Strand

The Townsville City Council has recently introduced a program aimed at highlighting the many recreational aspects of the Strand, as well as complementing the many fitness facilities that are in use along The Strand.

All content from Kiddle encyclopedia articles (including the article images and facts) can be freely used under Attribution-ShareAlike license, unless stated otherwise. Cite this article:
The Strand, Townsville Facts for Kids. Kiddle Encyclopedia.