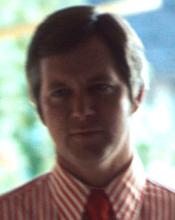 Stan Statham (April 7, 1939 – August 1, 2020) was an American television news anchor, activist and politician. He was born in Chico, California. He was elected as a Republican to the California State Assembly in 1976. He retired in 1994. Statham was known as a supporter of the State of Jefferson.

Statham died on August 1, 2020 in Oroville, California from a heart attack, aged 81.

All content from Kiddle encyclopedia articles (including the article images and facts) can be freely used under Attribution-ShareAlike license, unless stated otherwise. Cite this article:
Stan Statham Facts for Kids. Kiddle Encyclopedia.