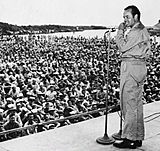 Stand-up comedy is a style of comedy where the comedian speaks directly to the audience. A person who performs stand-up comedy is known as a stand-up comic, stand-up comedian or simply stand up. It is usually done by a single comedian, and with the help of a microphone. The comedian normally speaks quickly many funny stories and short jokes (called bits) This is called a monologue, routine or act. Some stand-up comedians use music or magic tricks in their acts. Stand-up comedy is usually done in comedy clubs, bars, colleges and theaters. However, there is no restriction on where it can be done. Many smaller bars, clubs and restaurants do "open microphone" events where amateur comedians can perform comedy before a live audience, offering a way for the performers to become better and possibly become professional comedians.

All content from Kiddle encyclopedia articles (including the article images and facts) can be freely used under Attribution-ShareAlike license, unless stated otherwise. Cite this article:
Stand-up comedy Facts for Kids. Kiddle Encyclopedia.