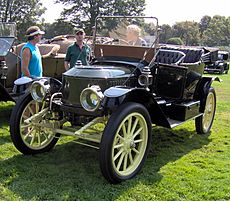 The Stanley Motor Carriage Company was an American manufacturer of steam-engine cars. The company was founded in 1898 and incorporated in 1901. The cars made by the company were called Stanley Steamers. They were produced from 1896 to 1924. In the early 1900s steam was used to power locomotives, steamships, even sewing machines. It seemed natural that steam could power cars. Of all the steam driven cars made in the early 20th century, the Stanley Steamer was the best-known and most popular. Today Stanley Steamers are rare automobiles and hard to find outside of museums and a few car collections.

Twins Francis E. Stanley and Freelan O. Stanley were the co-inventors of the Stanley Steamer automobile. Freelan was a teacher and high school principal. Francis was also a teacher, but left teaching in 1874 to become a photographer. In 1885 they both left their jobs and started a company to make photographic plates for photographers. they sold their shop four years later when they moved to Watertown, Massachusetts. They started another photographic plate business, but sold it to Eastman Kodak in 1904. The brothers had become interested in making cars and wanted to do that full time.

In 1899 F. O. Stanley and his wife drove to the top of Mount Washington in a Stanley Steamer

Many inventors were working on making cars during this time. The Stanley brothers built their first two cars as a hobby. In 1898 they brought their cars to the first Auto show in the US held in Boston. Cars from the US and Europe were on exhibition. There was also an outdoor competition. Their Stanley Steamers were faster and could climb hills much better than other cars. No gasoline engined car could climb the 15% grade. A Whitney steam car nearly climbed the 20% grade. The Stanley steamer easily climbed the 30% grade.

With the money from the sale of their company to Eastman Kodak, they began making steam cars. In 1899, they produced and sold over 200 cars, more than any other U.S. maker. In 1899, Freelan and his wife Flora drove one of these cars to the top of Mount Washington in New Hampshire, the highest peak in the northeastern United States. The ascent took more than two hours and was notable as being the first time a car had climbed the 7.6 miles (12.2 km) long Mount Washington Carriage Road; the descent was accomplished by putting the engine in low gear and using the car's brakes. The twins later sold the rights to this early design to Locomobile, and in 1902 they formed the Stanley Motor Carriage Company.

Stanley licensed their designs to several other motor car companies. The White Motor Company was one who used the Stanley design and continued to produce steam cars until 1912. Stanley was the last manufacturer of steam powered cars. As the internal combustion engine designs improved, steam and electric cars lost much of their popularity. The numbers of cars sold went down to less than 600 a year in 1918. That year the Stanley brothers sold the company to Prescott Warren, a Chicago businessman. Francis Stanley died in an automobile accident later the same year (1918). His brother Freelan opened a hotel in Colorado called The Stanley Hotel. He lived to be 91 years old. Stanley Steamers were made until 1924. 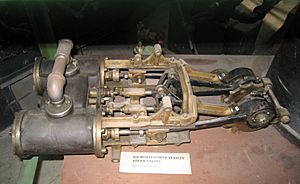 Early Stanley cars had bodies made of wood. The bodies were attached to steel frames by leaf springs. Later bodies were made of aluminum. A Kerosene burner heated a drum-shaped boiler. The boiler stored steam. The driver controlled the steam going to the engine by a throttle. There was no need for a transmission. Starting a Stanley in the morning would wake everyone who lived nearby. It sounded like a steam locomotive, hissing and chugging. It was very hard to steal a Stanley Steamer. It took 20 minutes to gather enough steam before it could move. Once it was moving it seemed to have unlimited power. An early Stanley Steamer was capable of 75 miles per hour. In 1906 a Stanley Steamer broke the land speed record at 127 miles per hour in Florida. To operate a Stanley Steamer, the driver had to watch a number of gauges. There were 13 handles, pumps and valves to adjust. They carried only a small amount of water due to its weight. The car could only go about 40 miles before it had to add water. The kerosene burner was known to cause fires. The easier to operate gasoline powered internal combustion engine caused the steam car to become obsolete.

All content from Kiddle encyclopedia articles (including the article images and facts) can be freely used under Attribution-ShareAlike license, unless stated otherwise. Cite this article:
Stanley Motor Carriage Company Facts for Kids. Kiddle Encyclopedia.