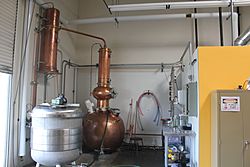 Distillery planning started in late 2011. In 2012 the location was identified near the Craftsman Brewing Co. The area is zoned for "light industrial" in the City of Pasadena Enterprise Zone. In April 2013 a space became available and leased. Applications where submitted to the TTB and CA ABC. Waiting several months the TTB application started its review, at that moment in time the Congress shutdown the government for six weeks, plus three more weeks to get it going again; TTB approved and issued its license November 21, 2013. The CA ABC approved and issued its license December 21, 2013. Actually doing business was delayed by municipal concerns about the manufacture of alcoholic beverages, and Stark Spirits only sold its first products in December 2014. Stark Spirits facility is less than 1200 square feet, and is essentially a nano-distillery because of the annual production capacity. At full production capacity, including the bottling of barrel-aged rum and whiskey, the distillery can manufacture fewer than 5000 cases annually.

The local community had shown advanced interest in the distillery, and three cases of their Sunshine Orange Brandy were purchased in retail venues within days of appearing on shelves.

Greg Stark is the head distiller and Karen Robinson is the assistant distiller. Greg started his distilling business after many years of making highly acclaimed home-brewed wine and beer. Stark Spirits has the goal of producing premium single malt whiskey. The diverse product line also includes rum, orange brandy, and gin. Stark Spirits received recognition as a certified craft distillery because it meets the criteria of being owned by the distiller, manufactures and bottles all its products, and produces less than 50,000 cases a year. (ADI link) Stark Spirits is dedicated to the tradition of producing small batches of hand-crafted spirits by traditional methods.

Small scale craft distilling has been a legitimate enterprise in the United States for about 20 years. (RN) The micro-distilling industry began in California and now has a presence in all 50 states. The craft distilling industry accounts for 1% of the spirit manufacturing industry in the United States. (RN-IBIS) The Federal regulation of spirit-producing businesses does not distinguish between those producing a few thousand cases a year and those producing millions. The industry is regulated by the TTB—the Tobacco and Trade Bureau, which has regulations as diverse and minute as the size of type font on the labels of bottles. (RN—TTB regs)

The Federal government does allow individual state government to set their own regulations in many areas governing the production of spirits, including the implementation of the 3-tier system. The 3-tier system was put in place when Prohibition ended, with the good intention of preventing monopolies of retail venues by manufacturers. (RN—legislation info) Manufacturers are required to sell only to distributors, who are independent of manufacturing of spirits, and the distributor then is the only business authorized to sell to retailers. Consumers can buy spirit beverages only from retailers—unless the state in which they live authorizes direct sales. In 42 states legislation has been passed to allow micro-distilleries in their state to sell directly to customers on the premises or at a legally established tasting room. (RN) California, where Stark Spirits is located, is not one of those states.

Generally, a micro-distillery has been characterized as one that produces no more than 100,000 cases of spirits annually. A strong case has been made to further reduce the allowable output for a distillery to be labeled a craft distillery to 50,000 cases or less annually. (RN—ADI and others) Several organizations have been formed within the craft distilling industry to improve the economic issues that undermine the viability of artisan distilling, and this has added to the fuzziness of the label "craft distillery". Many spirit products being sold as artisan or craft-produced are made by small companies owned by the mega-spirit manufacturing businesses. (RN) This has had a significant effect on the definition of terms, which has now expanded to include distilleries producing less than 316,000 cases a year. (RN—current Federal legislation under consideration) Politics continues to make strange bedfellows.

Micro-distilleries throughout the United States, regardless of which definition applies to them, are hoping that recently introduced Federal legislation will pass that permits a lower taxation rate on the spirits that they produce. Currently mega and micro and nano distilleries all pay $13.50 per proof gallon. (RN—TTB) Proof is the determination of the amount of alcohol by volume contained in a gallon of liquid, doubled. A spirit beverage of 80 proof has 40% alcohol by volume, and therefore is taxed at less than the amount of a full gallon, or 80% of $13.50. 151 proof rum is 75.5% alcohol by volume, and is taxed at 150% of $13.50.

The Federal alcohol taxes paid by micro-breweries and micro-wineries are $7/each 31 gallon barrel up to 60,000 barrels annually. If the brewery produces less than 2,000,000 barrels annually, the balance is taxed at $18/barrel; if the brewery manufactures more than 2,000,000 barrels annually, every barrel is taxed at $18/barrel. (RN_TTB regs) This tax break is a significant factor in equalizing the playing field for the micro-breweries and micro-wineries that compete with the mega-producers. Micro-distilleries are hoping that the same consideration will be given them. Small businesses are the backbone of the American economy, and industry organizations such as American Craft Spirits Association and California Artisan Distillers Guild are working for legislative changes that promote the success of the micro-distillery industry.

All content from Kiddle encyclopedia articles (including the article images and facts) can be freely used under Attribution-ShareAlike license, unless stated otherwise. Cite this article:
Stark Spirits Distillery Facts for Kids. Kiddle Encyclopedia.