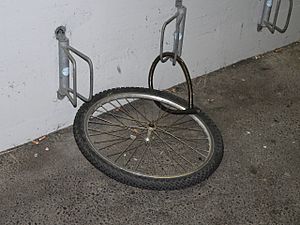 Example of theft: only the wheel of the bicycle is left

Theft is when one person or group takes from another persons or state any [wikt:object object], money, or information without permission. A person who has been convicted of theft may be called a thief. However, the practice of engaging in theft is also called stealing. There are many different types of theft, such as pickpocketing and shoplifting. Burglary and robbery are separate crimes which involve theft.

When thieves steal things for money, they usually pick cars, electronics, laptops, or other things they can sell easily. Sometimes thieves use pawn shops to sell things easily to someone who will not ask questions.

All content from Kiddle encyclopedia articles (including the article images and facts) can be freely used under Attribution-ShareAlike license, unless stated otherwise. Cite this article:
Theft Facts for Kids. Kiddle Encyclopedia.