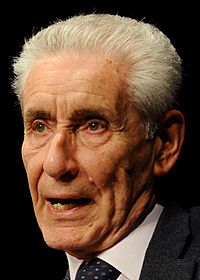 Stefano Rodotà (30 May 1933 – 23 June 2017) was an Italian jurist and politician. He served as Vice President of the Chamber of Deputies from 30 April 1992 through 4 June 1992. He was born in Cosenza, Italy. He was a member of the Democratic Party of the Left and later became an Independent. In 2013, Rodotà became a candidate for President of Italy for the Five Stars Movement nomination.

All content from Kiddle encyclopedia articles (including the article images and facts) can be freely used under Attribution-ShareAlike license, unless stated otherwise. Cite this article:
Stefano Rodotà Facts for Kids. Kiddle Encyclopedia.