Streetcars in Cleveland facts for kids 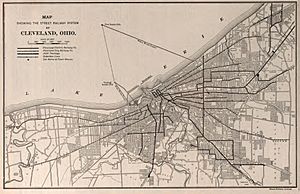 The last CTS streetcar ran on January 24, 1954 with a free ride celebration on the Madison line from Public Square to West 65th and Bridge.

The following table lists the conversion of the Cleveland streetcar lines to trackless trolleys (or trolleybuses) or buses in reverse chronological order, with the last date of streetcar service, the line name, the modern line number, the type of vehicle replacing the streetcar, and the length of time that lasted. Shuttle lines or "dinkeys" are not included.

All content from Kiddle encyclopedia articles (including the article images and facts) can be freely used under Attribution-ShareAlike license, unless stated otherwise. Cite this article:
Streetcars in Cleveland Facts for Kids. Kiddle Encyclopedia.