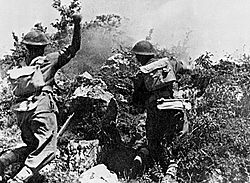 Soldiers of 2nd Polish Corps in the battle of Monte Cassino

A strongpoint is a key point in a defensive fighting position which the rest of the positions rely on. Its primary requirement is that it should not be easy to defeat by the enemy. In general, high ground is preferred. But any good tactically important terrain can be used as a strongpoint. Examples from history include Battle of Thermopylae, where 300 Spartans held off an entire Persian army at a narrow pass in the mountains. In the Battle of Monte Cassino in Italy in World War II, the area around the abbey of Monte Cassino was used by the German army as a strongpoint until it was destroyed by American bombers.

All content from Kiddle encyclopedia articles (including the article images and facts) can be freely used under Attribution-ShareAlike license, unless stated otherwise. Cite this article:
Strongpoint Facts for Kids. Kiddle Encyclopedia.