Styrax americanus, the American snowbell or mock-orange, is a plant species native to the southeastern United States and the Ohio Valley. It has been reported from Texas and Florida to Virginia and Missouri. It generally grows in swamps and on floodplains and in other wet locations. 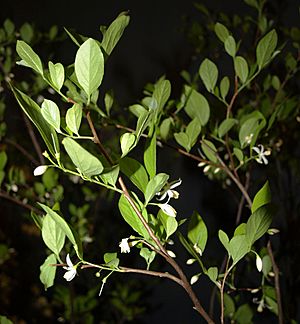 Styrax americanus is native to the eastern United States

Styrax americanus is a shrub or small tree up to 5 m (17 feet) tall. Leaves are elliptic to ovate, up to 10 cm (4 inches) long. Flowers are borne in the axils of some of the leaves.

Two varieties of this species exist:

All content from Kiddle encyclopedia articles (including the article images and facts) can be freely used under Attribution-ShareAlike license, unless stated otherwise. Cite this article:
Styrax americanus Facts for Kids. Kiddle Encyclopedia.