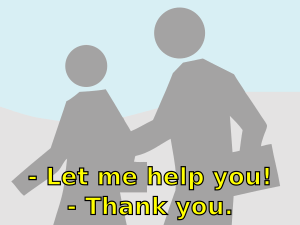 Example of a television program with subtitles

Subtitles are text-like versions of the dialog in movies. Subtitles are also used in television programmes and video games. The text is usually displayed at the bottom of the screen. Subtitles can also be a form of written translation of a dialog in an unfamiliar language, or a written text version of the spoken words in the same language, with or without added information to help watchers who are not able to hear or people who cannot understand the spoken dialogue.

All content from Kiddle encyclopedia articles (including the article images and facts) can be freely used under Attribution-ShareAlike license, unless stated otherwise. Cite this article:
Subtitle (captioning) Facts for Kids. Kiddle Encyclopedia.