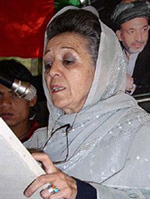 Suhaila Siddiq (March 11, 1949 – December 4, 2020) was an Afghan politician. She was born in Kabul, Afghanistan. Seddiqi was Minister of Public Health from 2001 to 2004 during the Hamid Karzai presidency.

Seddiqi died on December 4, 2020 in Kabul from Alzheimer's disease-related problems at the age of 71.

All content from Kiddle encyclopedia articles (including the article images and facts) can be freely used under Attribution-ShareAlike license, unless stated otherwise. Cite this article:
Suhaila Seddiqi Facts for Kids. Kiddle Encyclopedia.