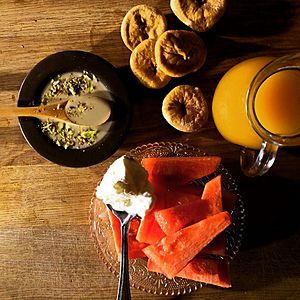 An example of a Jordanian suhoor table

Sahūr or sahoor ( Arabic: سحور‎, romanized: saḥūr, lit. 'of the dawn', 'pre-dawn meal'code: ar is deprecated ) is the meal consumed early in the morning by Muslims before fasting (sawm), before dawn during or outside the Islamic month of Ramadan. The meal is eaten before fajr prayer. Suhur is matched to iftar as the evening meal, during Ramadan, replacing the traditional three meals a day (breakfast, lunch and dinner), although in some places dinner is also consumed after iftar later during the night.

Being the last meal eaten by Muslims before fasting from dawn to sunset during the month of Ramadan, sahur is regarded by Islamic traditions as a benefit of the blessings in that it allows the person fasting to avoid the crankiness or the weakness caused by the fast. According to a hadith in Sahih al-Bukhari, Anas ibn Malik narrated, "The Prophet said, 'take suhoor as there is a blessing in it.'"

All content from Kiddle encyclopedia articles (including the article images and facts) can be freely used under Attribution-ShareAlike license, unless stated otherwise. Cite this article:
Suhur Facts for Kids. Kiddle Encyclopedia.