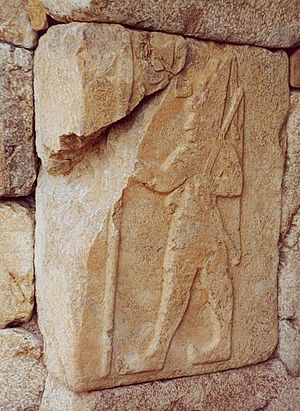 Relief of Suppiluliuma II in Hattusa

Suppiluliuma II, the son of Tudhaliya IV, was the last known king of the New Kingdom of the Hittite Empire, ruling 1207 BCE – c.1178 BCE, contemporary with Tukulti-Ninurta I of Assyira.

He is known from two inscriptions in hieroglyphics. They record wars against former vassal Tarhuntassa, and against Alasiya in Cyprus.

After the fall, the Kaskians were probably in control of Hatti. Hattusa itself was destroyed, its site only re-occupied by a Phrygian fortress some 500 years later.

All content from Kiddle encyclopedia articles (including the article images and facts) can be freely used under Attribution-ShareAlike license, unless stated otherwise. Cite this article:
Suppiluliuma II Facts for Kids. Kiddle Encyclopedia.