The Sydney Jewish Museum is a history museum in Sydney, Australia, which documents the Holocaust, the history of the Jewish people in Australia, and explores human rights issues in Australia.

The museum is an institution that collects and preserves historic objects, commemorates and educates, with a mission to challenge visitors’ perceptions of morality, social justice, democracy and human rights.

The Sydney Jewish Museum is located at 148 Darlinghurst Road, Darlinghurst, and is housed in the historic Maccabean Hall, which was built to commemorate Jewish men and women from New South Wales who served in World War I. This building, which was formally opened on Armistice Day 1923 by Sir John Monash, has long been a hub of Jewish life in Sydney and was judged an appropriate site for the Sydney Jewish Museum.

26 years since its inception, the Museum continues to give a voice to the victims of the Holocaust so their stories can start conversations and inspire change. The Sydney Jewish Museum’s tagline, "Where history has a voice", distills the origins of the Museum and its mission that continues to carry it forward into the future. The objects within the collection and on display in the Museum’s exhibitions tell the stories of their owners and contribute to the narratives that the Museum tells within its walls. Testimony, accessible digitally and face-to-face, anchors the objects in the display cases to real world events, and gives life and narrative to history. 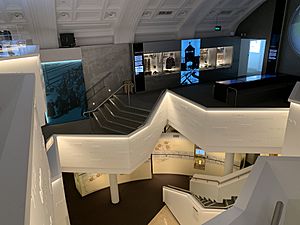 The Sydney Jewish Museum was established in 1992 by the generation of Holocaust survivors who came to Australia. They envisioned the Museum as a place which could hold their stories and personal objects, memorialise those who were murdered during the Holocaust, and within which the lessons from the past would be taught.

The museum was officially opened by Rear Admiral Peter Sinclair AC, the Governor of New South Wales, on 18 November 1992. The museum was founded by the late John Saunders AO and members of the Australian Association of Jewish Holocaust Survivors.

Australia has a higher proportion of Holocaust survivors (per capita) than any country except Israel.

Culture and Continuity: Journey through Judaism

This exhibition on the Museum's Ground Floor explores Jewish history from Biblical origin in the Ancient Near East to the thriving Jewish community in Australia.

Serving Australia portrays the stories of Jewish servicemen and women in the Australian defence forces from its inception to the present.

Reflecting the dedication, valour and patriotism of the greater Australian community, this exhibition features the social-military history of Jewish men and women in time of war.

Located over three levels, this exhibition traces the persecution and murder of European Jewry from 1933 to 1945 and explores the contemporary and ongoing resonance of these unprecedented events.

The exhibition also recounts the new lives forged by survivors following their arrival in Australia and their contribution to the rich, multicultural fabric of contemporary Australian life.

The Holocaust and Human Rights

A capstone to the Holocaust exhibition, The Holocaust and Human Rights Exhibition outlines human rights achievements and challenges, and focuses on the key human rights issues facing Australia today.

The exhibition uses interactive media and new digital technologies to explore local issues pertaining to the rights of Refugees and Asylum Seekers; People with Disabilities; First Australians; and the LGBTIQ Community.

The place promotes deep, reflective thought, even on topics that might prove irresolvable.

The museum also has a program of regularly changing feature exhibitions.

The museum library was created from the entire collection of books donated by Australian Association of Jewish Holocaust Survivors. Since then, the Resource Centre and Library has grown to over 6000 volumes, journals, audio and videotapes, including over 2,500 personal testimonies of Holocaust survivors in Australia. The centre is open to the public during museum hours and staffed by a librarian. The collection provides material for the exhibitions and covers a wide range of themes including antisemitism, war crimes, holocaust in art and literature, and Australian Jewish history.

All content from Kiddle encyclopedia articles (including the article images and facts) can be freely used under Attribution-ShareAlike license, unless stated otherwise. Cite this article:
Sydney Jewish Museum Facts for Kids. Kiddle Encyclopedia.