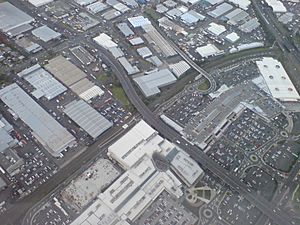 An aerial view showing most of the centre in mid-2008 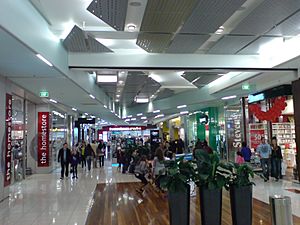 Inside, the main mall strip

Sylvia Park is a large business park and shopping centre in the Auckland suburb of Mount Wellington in New Zealand. Less commonly known, the area around the centre (which includes some residential and other commercial developments) is also called Sylvia Park (the centre takes its name from the area, not vice versa, but Sylvia Park is not officially a suburb). The area is located adjacent to two major interchanges of the Auckland Southern Motorway – the South Eastern Highway (which passes directly above the shopping centre on a viaduct) and Mount Wellington Highway.

Land and store space in the Sylvia Park development is let out to a wide variety of major retailers, one cinema complex and one supermarket. In addition, the centre has franchises of all major New Zealand banks and a wide variety of other retailers. The centre employs approximately 2,500 staff.

In a rating of New Zealand shopping centres by a retail expert group in 2008, Sylvia Park received four stars, the maximum rating, based on the criteria of amount of shopping area, economic performance, amenity and appeal as well as future growth prospects. Especially praised were the wide catchment of shoppers and the motorway accessibility.

The name Sylvia Park is from the large country house/stud farm built there in the late 19th century. It was the country residence of Sir Maurice O'Rorke, one of the first Speakers of the House. Sir Maurice used the land primarily for horse breeding. The house was demolished in the 1960s. Carbine Road is named after the racehorse Carbine who was foaled at Sylvia Park Stud.

During the Second World War the United States Joint Purchasing Board contracted the New Zealand Public Works Department to construct storage facilities on a 21.77 ha site that had originally been part of the Sylvia Park Stud. 48 storehouses, each 46 x 37 m, were constructed between April 1943 and May 1944. The 48 buildings were linked by a system of interconnecting sealed roads and serviced by a 3.2-km railway siding, built onsite. The total cost of the stores, the largest built in Auckland, was £425,922 (around $34,000,000 in 2011).

As the United States Forces reduced their presence after the war the New Zealand Army began to occupy the site from 1946 as a storage area with full occupancy achieved in 1948. During its time at a New Zealand Military installation Sylvia Park would be the home to a number of units including a RNZAOC Vehicle Depot, a RNZEME Field Workshop and a RNZAMC Field Hospital. By 1992 the site had outlived it usefulness as a military installation and the New Zealand government sold the Sylvia Park site for $7 million. The buildings, which gradually became empty, were demolished for the shopping mall.

The opening of Stage Five was planned for 2008 and to add NZ$200 million of office space in four separate buildings. Kiwi Income noted that it had always planned to develop offices around the perimeter of the centre, but had delayed this until the retail was starting to take off. Kiwi Property have begun the $280 million expansion, which sees the construction of a nine-floor office block and 20,000 square meters of addition retail space.This opened in October 15 2020.

All content from Kiddle encyclopedia articles (including the article images and facts) can be freely used under Attribution-ShareAlike license, unless stated otherwise. Cite this article:
Sylvia Park Facts for Kids. Kiddle Encyclopedia.