Syzygium corynanthum is a medium size tree, occasionally reaching 30 metres in height and a 90 cm in trunk diameter. The tree's crown appears dark and full.

The bark is a grey and scaly, with numerous depressions caused by the shedding of bark scales. Syzygium corynanthum are slightly buttressed at the base. 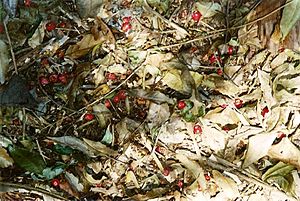 The leaves are opposite, simple and entire. Oil dots numerous, about five diameters apart of different sizes. Leaf stalks are 6 mm long. Flowers are in short dense panicles. Petals cream, four in number, appearing in April to July.

The fruit matures from September to December, being a red berry, broader towards the tip than at the base. Four persistent calyx lobes surround the base of the fruit, from which the style usually protrudes. The taste of the fruit is not particularly sour, as the common name might suggest.

Seed germination is slow, commencing at 40 days, and being complete after 200 days. Fruit is prone to insect attack. Soaking of the seeds is recommended to drown insect larvae. Fruit are eaten by many rainforest birds, including the wompoo fruit dove and catbird.

All content from Kiddle encyclopedia articles (including the article images and facts) can be freely used under Attribution-ShareAlike license, unless stated otherwise. Cite this article:
Syzygium corynanthum Facts for Kids. Kiddle Encyclopedia.