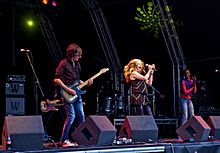 T'Pau are an English pop-rock band. They formed in Shrewsbury, England in 1986. Carol Decker is the lead singer for the band. They had a number of top 40 hits around the United Kingdom and United States. They were "Heart and Soul", "China in Your Hand" and "Valentine".

Their first hit was the 1987 pop-rock ballad "Heart and Soul". It was did badly at first in the UK charts. It became a hit on the United States Billboard Hot 100. It hit #4 after being shown in a Pepe Jeans advertisement. It repeated the upswing on the UK Singles Chart.

Their first album, Bridge of Spies (called TPau in the USA) hit #1 in the UK and went quadruple platinum.

All content from Kiddle encyclopedia articles (including the article images and facts) can be freely used under Attribution-ShareAlike license, unless stated otherwise. Cite this article:
T'Pau Facts for Kids. Kiddle Encyclopedia.