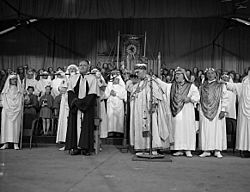 Thomas Llewelyn Jones (11 October 1915 – 9 January 2009) was a Welsh language author. Over a writing career of more than 50 years, he became one of the most prolific and popular authors of children's books in Welsh. He wrote, and was generally known, as T. Llew Jones.

T. Llew Jones was born at 1 Bwlch Melyn, Pentrecwrt, Llandysul. Educated at Ysgol Gynradd Capel Graig and Llandysul Grammar School, he was a primary school teacher in various schools in Ceredigion for 35 years before becoming a full-time writer, first at Tregroes Primary School and then at Ysgol Coedybryn near Llandysul where he became headmaster. He first came to prominence as a poet, winning the chair at the National Eisteddfod in 1958 and then again in 1959.

He continued to write poetry, for children often, but was best known as a writer of adventure and detective novels for children. Many of these are historical novels based on the exploits of people such as Bartholomew Roberts and Twm Sion Cati. He published well over 50 books in total, including books for adults as well as children. Some of these are non-fiction titles, for example Ofnadwy Nos is an account of the wrecking of the Royal Charter. Some of his books have been translated into English and a number have been adapted for television.

He was awarded an honorary MA degree by the University of Wales in 1977, and in 1991 he was awarded the Mary Vaughan Jones Award, given for outstanding contributions to children's literature in Wales. In March 2005, aged nearly 90, he won the chair in Cymdeithas Ceredigion's annual Eisteddfod.

A new Welsh-medium primary school, Ysgol Gynradd Gymunedol T Llew Jones, in Brynhoffnant near Llangrannog, was named in his honour in 2012. It was built to replace four small primary schools in the villages of Blaenporth, Glynarthen, Rhydlewis and Pontgarreg.

He was the father of the political activist, Emyr Llewelyn, international chess player, Iolo Ceredig Jones and Eira Prosser.

Jones was also a keen chess player, he wrote the only Welsh language chess manual together with his son, Iolo. He was one of the small group of Welsh Chess Union members and officials who instigated and fought for the secession of the WCU from the British Chess Federation (as it then was) in 1970 and its successful application to join the World Chess Federation (FIDE) as an independent member. As well as holding several posts in the WCU, Jones founded and edited Y Ddraig which grew from the Dyfed Chess Association newsletter into the magazine of Welsh chess in the 1970s. He managed the Men's 1974 Olympiad team in Nice which achieved Wales best-ever result and also the Women's team in the 1976 Olympiad in Israel. He was for many years Vice-President of the WCU.

Jones was heavily involved in Dyfed chess from the 1960s onwards, in founding and running the Dyfed Chess Association, its league, Cardigan Chess Club and the highly successful Dyfed Open Congress. At his death he was Life President of the Dyfed Chess Association. Over the board he was a keen and competitive player, but achieved his best results at postal chess, representing Welsh international teams with distinction.

T.Llew Jones is the best

All content from Kiddle encyclopedia articles (including the article images and facts) can be freely used under Attribution-ShareAlike license, unless stated otherwise. Cite this article:
T. Llew Jones Facts for Kids. Kiddle Encyclopedia.