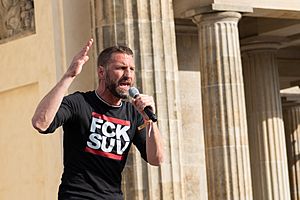 Tadzio Müller (born 1976) is a German climate and LGBT activist; and political scientist. He works as a speaker on climate justice and international politics at the Center for International Dialogue and Cooperation of the Rosa Luxemburg Foundation.

Müller was involved in protests critical of globalization. He has been active in the environmental and climate movement since the 2000s. During his doctoral studies he participated in climate camps in England, and helped to establish them in Germany. From autumn 2007, he was one of the organizers of the first German climate camp in Hamburg and was its spokesman.

Around 2010, he was instrumental in the protests against the transport of nuclear waste in Germany, and was one of the organizers of the “Castor? Gravel!". He was spokesman for the climate alliance Climate Justice Action in protests against the 2009 United Nations Climate Change Conference, Copenhagen, and was arrested.

Tadzio Müller is HIV- positive and works publicly against discrimination against people living with HIV. Since 2019, he has been campaigning for solidarity between the LGBT movement and the climate movement.

All content from Kiddle encyclopedia articles (including the article images and facts) can be freely used under Attribution-ShareAlike license, unless stated otherwise. Cite this article:
Tadzio Müller Facts for Kids. Kiddle Encyclopedia.