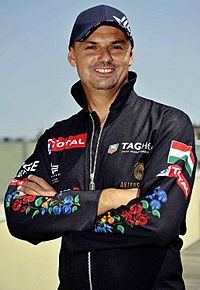 Tamás Nádas (20 March 1969 – 7 March 2014) was a Hungarian aerobatics pilot and world champion air racer. He was born in Kiskunlacháza, Hungary.

Nádas was killed when his plane crashed during an inverted (upside down) flyover at the Al Khor Airport in Al Khor, Qatar. He was 44 years old.

All content from Kiddle encyclopedia articles (including the article images and facts) can be freely used under Attribution-ShareAlike license, unless stated otherwise. Cite this article:
Tamás Nádas Facts for Kids. Kiddle Encyclopedia.