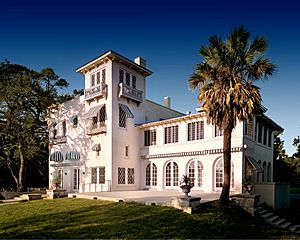 Laguna Gloria is one of several historic houses in Tarrytown.

The neighborhood is located in ZIP Code 78703 and is bordered by Lake Austin Boulevard on the south, Lake Austin on the west, West 35th Street on the north and Mopac Expressway on the east. Major roads in the area include Exposition Boulevard, Enfield Road and Windsor Road. Tarrytown also encompasses the sub-neighborhood of Brown Herman.

Tarrytown is most often defined as the area bounded by Enfield Road in the South, 35th Street in the North, MoPac Expressway in the East, and Lake Austin in the West. The neighborhood has two shopping outlets: Tarrytown Center and Casis Village, both of which feature local businesses. The neighborhood is also home to two schools, Casis Elementary and O. Henry Middle School. The neighborhood is serviced by two bus routes, No. 18 (Enfield/MLK Station) and Nos. 21-22 (Exposition/Chicon), both operated by the Capital Metropolitan Transportation Authority, or Cap Metro.

It is three miles from downtown Austin. Tarrytown is surrounded by the lush foliage from old shade trees.

Tarrytown caught the eye of the national media when Jeanne Daniels, a Houston, Texas resident and animal rights activist, inherited a shopping center at Windsor Road and Exposition and decided to eliminate any stores that sold meat or leather. At least one shop went out of business, and engendered some seriously angry responses from locals. For example, the former Holiday House (a popular spot for hamburger lovers) was replaced by the all-vegetarian Nu Age Café, which has since closed.

The official residence of the chancellor of the University of Texas System is located in Tarrytown.

All content from Kiddle encyclopedia articles (including the article images and facts) can be freely used under Attribution-ShareAlike license, unless stated otherwise. Cite this article:
Tarrytown, Austin, Texas Facts for Kids. Kiddle Encyclopedia.