Taylor-Stace Cottage, built in 1847, is the oldest surviving house of European origin in the Wellington region of New Zealand. The cottage is classified as a Category I historic place (a place of "special or outstanding historical or cultural heritage significance or value") by the New Zealand Historic Places Trust. Taylor-Stace Cottage was built by immigrants William and Anne Taylor, who had come to New Zealand in 1840. 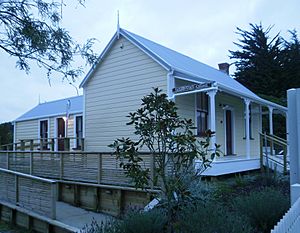 During the 1970s the cottage was used as a craft gallery, and in the 2000s it was an art gallery for a couple of years.

In 2010 and 2011 combined funding and effort by the new owners, Porirua City Council and the New Zealand Historic Places Trust, saw the cottage restored and raised to protect it from flooding. Its current use is as a beauty salon.

All content from Kiddle encyclopedia articles (including the article images and facts) can be freely used under Attribution-ShareAlike license, unless stated otherwise. Cite this article:
Taylor-Stace Cottage Facts for Kids. Kiddle Encyclopedia.