Te Kumi railway station was a station on the North Island Main Trunk in New Zealand. The railway had been delayed by Māori opposition to it entering King Country and Te Kumi was one of the last places where such resistance was shown.

After being arrested at Parihaka in 1879, Ngāti Kinohaku were returned to Te Kumu, where they tried to establish a similar settlement. In March 1883, Charles Wilson Hursthouse was held at Te Kumi by Te Mahuki, whilst surveying for the railway. Te Mahuki posed for a photograph at Te Kumi in 1885, after serving a year of hard labour. 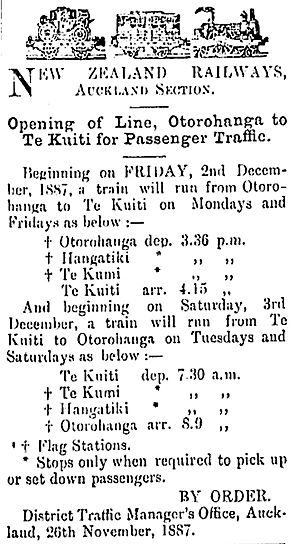 Just a single track and a sub station now remain.

All content from Kiddle encyclopedia articles (including the article images and facts) can be freely used under Attribution-ShareAlike license, unless stated otherwise. Cite this article:
Te Kumi railway station Facts for Kids. Kiddle Encyclopedia.