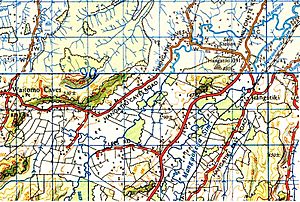 Hangatiki railway station was a flag station on the North Island Main Trunk in New Zealand.

In 1915 Hangatiki was described as a small township with a post and telegraph office, where passengers for "the famous Waitomo and Ruakuri caves alight". The guidebook said Waitomo was 6 mi (9.7 km) away, "by good metalled road, a conveyance meeting the express trains and conveying passengers to the excellent Government Accommodation House at Waitomo." The fare was 2/6 each way (about $18 in 2015 money).

All content from Kiddle encyclopedia articles (including the article images and facts) can be freely used under Attribution-ShareAlike license, unless stated otherwise. Cite this article:
Hangatiki railway station Facts for Kids. Kiddle Encyclopedia.