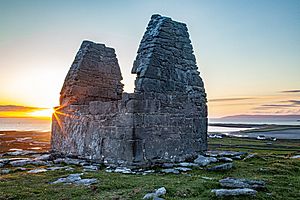 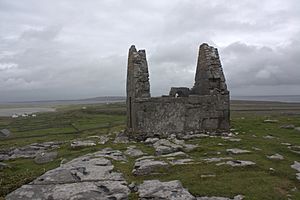 The oratory Teampall Bheanáin ( meaning "Benan's Temple") is situated near Kilronan on Inishmore, Aran, Galway Bay, Ireland. A unique example of Celtic church construction. It marks the location of the original monastic settlement founded by Benen, a disciple of St. Patrick, the national saint of Ireland. It dates from the 11th century, and has stood unaltered a thousand years.

It is not a conventional church in the sense of its ability to hold a congregation. It is reasonably assumed to be the tomb-shrine of the saint. This ensured its survival when the adjacent round tower and medieval monastery were recycled to fortify the now-ruined Cromwellian coastal fortress nearby.

The oratory is situated high on a ridge, which dominates the windward southeast sea approach to the main island port. Roofless and with unusually high squared gables it cuts a striking, almost oriental silhouette against the skyline, even though internally it measures a tiny 3.2 m x 2.1 m. It is formed from massive blocks of stone (a single slab forms a half of one side), and is bonded by mortar and very careful fitting. Its thick walls are pierced by a traveated (three beam) narrow north doorway with inclining jambs, and cut away lintel. A small east window with a single stone semi-circular head keeps a vigil towards the mainland of Ireland. The altar faces south rather than east/west which is the usual position, though the symbolism of this is not known.

All content from Kiddle encyclopedia articles (including the article images and facts) can be freely used under Attribution-ShareAlike license, unless stated otherwise. Cite this article:
Teampall Bheanáin Facts for Kids. Kiddle Encyclopedia.