Kids Encyclopedia Facts
This page is about the bay. For the song, see Galway Bay (song). 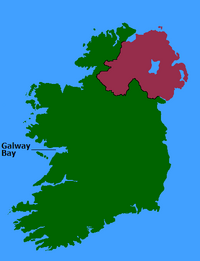 Galway Bay (Irish: Loch Lurgain or Cuan na Gaillimhe) is a large bay (or sea lough) on the west coast of Ireland, between County Galway in the province of Connacht to the north and the Burren in County Clare in the province of Munster to the south. Galway city is located on the northeast side of the bay. The bay is about 50 kilometres (31 mi) long and from 10 kilometres (6.2 mi) to 30 kilometres (19 mi) in breadth. The Aran Islands (Oileáin Árann) are to the west across the entrance and there are numerous small islands within the bay. To the west of Galway, the rocks are granite but to the south they are limestone.

The approaches to the bay between the Aran Islands and the mainland are as follows:

Galway Bay is famous for its unique traditional sailing craft, the Galway hooker.

The coastal parts of Galway Bay have been designated a Special Area of Conservation. This is because of the wide range of important habitat types which include intertidal mud and sandflats, other littoral habitats, coastal lagoons, saltmarshes, turloughs, vegetated cliffs, calcareous grassland and limestone pavements. Galway Bay offers habitat to common seals and otters, and is an important ornithological site for seabirds, waders and waterfowl.

The lagoons are slightly brackish and have a diverse flora, including tasselweed and the algae Chaetomorpha linum, Chara canescens and Lamprothamnion papulosum, all of which are lagoon specialists. There are areas of fen dominated by great fen-sedge and black bog-rush, with common reed, purple moor-grass, bogbean and long-stalked yellow-sedge. The turlough at Ballinacourty forms a temporary lake of about 25 ha (60 acres) in winter. Wetland species found near the exit-hole of the turlough include amphibious bistort, marsh bedstraw and marsh cinquefoil, with silverweed, water mint and creeping bent in the less frequently flooded places near the edge; sedges (Carex spp.) dominate the rest of the area.

The orchid-rich grassland occurs on the flanks of some low drumlin hills to the west of Galway City. The plants here are calcium-loving species including kidney vetch, harebell, spring gentian, yellow-wort, greater knapweed, common spotted-orchid, lesser twayblade, pyramidal orchid and some scrubby juniper. An unusual feature of the saltmarshes is that, beside thrift, lax-flowered sea lavender, red fescue, common scurvygrass, common saltmarsh-grass, saltmarsh rush and sea rush, dwarf brown seaweeds are present among the vegetation.

On 4 May 1902, eight fishermen from a nearby village lost their lives while sailing on Galway Bay, near Kilcolgan. Seven (Patrick Folan, Patrick Burns, Patrick McDonagh, John Barrett, Michael Burke, Michael Dwyer and Stephen Hynes) drowned; Patrick Walsh swam to shore at nearby Kilcolgan, but died of exhaustion on the beach. A fundraising campaign was organised for the families of the drowned fishermen. 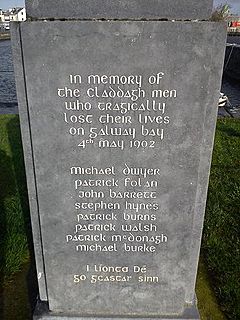 All content from Kiddle encyclopedia articles (including the article images and facts) can be freely used under Attribution-ShareAlike license, unless stated otherwise. Cite this article:
Galway Bay Facts for Kids. Kiddle Encyclopedia.