A turlough, or turlach, is a type of disappearing lake found mostly in limestone areas of Ireland, west of the River Shannon. The name comes from the Irish tur, meaning "dry", with the suffix -lach, meaning "a place" (in an abstract sense). The -lach suffix is often mistakenly spelled and/or thought to refer to the word loch, the Irish, Scottish Gaelic and Scots word for "lake". The landforms are found in Irish karst (exposed limestone) areas.

The features are almost unique to Ireland, although there is one example in Great Britain, Pant-y-Llyn at Cernydd Carmel near Llandeilo. They are of great interest to many scientists: geomorphologists are interested in how turloughs were formed, hydrologists try to explain what makes turloughs flood, botanists study the unusual vegetation which covers the turlough floor, and zoologists study the animals associated with the turloughs.

The turlough at Carran, Co. Clare, Ireland. The water level is high following a spell of wet weather. (Late May, 2005) 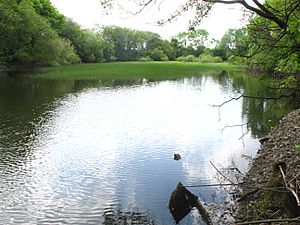 Turloughs are mostly found on the central lowlands west of the Shannon, in counties Galway, Clare, Mayo, and Roscommon, although a few are also found elsewhere, e.g. in Limerick, Sligo, Longford, and Cork.

Only three turloughs have been identified in Northern Ireland, namely Roosky, Green, and Fardrum Loughs located near Ely Lodge Forest in County Fermanagh. These constitute the most northerly turloughs in Ireland and have been collectively designated a Ramsar site and an Area of Special Scientific Interest. There is one turlough in South Wales, Pant y Llyn.

Rahasane turlough in County Galway is the largest surviving turlough in Ireland and is an important location for migrating and overwintering birds. It is noted for its greater white-fronted geese, whooper swans, wigeon, teal, and many waders in winter.

All content from Kiddle encyclopedia articles (including the article images and facts) can be freely used under Attribution-ShareAlike license, unless stated otherwise. Cite this article:
Turlough (lake) Facts for Kids. Kiddle Encyclopedia.