Tears of the Turtle Cave facts for kids

Tears of the Turtle Cave is located in the Bob Marshall Wilderness in western Montana and is currently the deepest known limestone cave in the United States since passing New Mexico's Lechuguilla cave in 2014. As of August 2016 the cave is known to be 1,659 feet (506 m) deep and 1.32 miles (2.12 km) long. The cave consists mostly of roughly 2 foot wide fissure passage passing over dozens of short rope drops. With a mean temperature of 39 degrees F (4 C), it is muddy and poorly decorated. 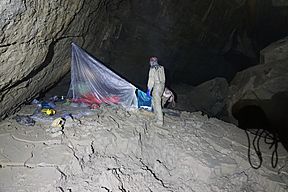 Camp near the known bottom of the cave

The entrance to Tears of the Turtle Cave was found in 2006. The cave passage is mostly a two to three foot wide fissure that follows a stream downward through over 40 rappels. In 2014 a team of nine cavers explored new passage pushing the cave to a depth of 1629 feet and in doing so passed New Mexico's Lechuguilla Cave to become the deepest known limestone cave in the United States. Exploration continued in 2016 when teams returned to push the cave to its current known depth of 1659 feet. On those trips the difficulty necessitated establishing camp in the cave for the first time. This, along with the technical rope work, 39 degree temperature, and remote location of the cave make continued exploration difficult. A return trip is currently planned for 2019.

Ongoing exploration is done through the Caves of Montana Project, an official project of the National Speleological Society. Exploration is conducted under a MOU with the United States Forest Service.

The cave is located in typical karst landscape and is formed in the Cambrian Pagoda Limestone. Over the years water from rainfall and snowmelt have dissolved away the limestone to form a typical vadose solutional cave with fissure passage 2–3 feet wide and tall ceilings. 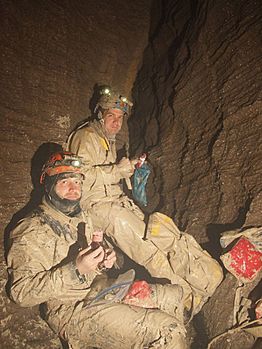 A wide spot in the passage near the known bottom of Tears of the Turtle cave.

All content from Kiddle encyclopedia articles (including the article images and facts) can be freely used under Attribution-ShareAlike license, unless stated otherwise. Cite this article:
Tears of the Turtle Cave Facts for Kids. Kiddle Encyclopedia.