Techniquest is a science and discovery centre located in Cardiff Bay. It previously had a sister charity located in Wrexham, along with locations in Llanberis in Gwynedd, and the Adventure Centre in Narberth, Pembrokeshire.

Techniquest was first established in Cardiff in 1986. It was founded by Professor John Beetlestone (1932–2016) and his colleagues from Cardiff University. Techniquest gives visitors a hands-on approach to science and includes a science theatre, a planetarium, and a discovery centre.

History of the Cardiff site

Techniquest first opened on 13 November 1986 on the site of the old British Gas showroom on the corner of Duke Street and St John Street. There were 48 exhibits at that time, many of them were designed and built by Techniquest. The former showroom housed the centre for around nine months. Less than seven weeks after it had opened Techniquest had welcomed its ten thousandth visitor.

In 1988 Techniquest re-opened in a pre-fabricated building opposite the now demolished Welsh Industrial and Maritime Museum in Bute Street. The two buildings were removed to make way for Mermaid Quay.

They moved again in 1995 about 100 metres along Stuart Street to its present location on the site of the former Baileys engineering workshop which is now its permanent headquarters. The building, the UK's first purpose-built science discovery centre, opened on 1 May 1995. It uses the steel framework of the original building which can be clearly seen on the photograph. It is currently closed until further notice due to (COVID-19) Coronavirus pandemic. 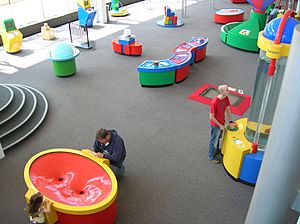 Its aims are to engage people with science and to motivate them to learn more and they also address science-related areas such as maths, engineering and technology. Techniquest operates exhibitions, shows and programmes intended to make science accessible to people throughout Wales, and to improve the quality of public debate about science and technology. It also offers comprehensive education services to schools and teachers, to complement formal education provision in Wales.

Techniquest takes exhibitions and programmes to special events at many venues around Wales, from shopping centres to major cultural events such as the National Eisteddfod, in addition to further activities through schemes such as Wales Gene Park, mathcymru, Science Café Wales and Teacher Science Network.

To provide this range of experiences, Techniquest maintains an Active Design and development arm, with workshops and facilities. It also work with a range of partners and other experts, which include academics, scientists, industry and government, both within Wales and internationally.

As an independent registered educational charity, Techniquest is funded from a variety of sources. The Welsh Government provides approximately 1/3 of the funding, particularly to support schools programmes, although it intends to withdraw this funding over the coming years. Admission charges help to meet operating costs, whilst grants and other earned income are also essential. They are currently seeking £12m of capital funding to develop their sites and services over the next 5 years.

All content from Kiddle encyclopedia articles (including the article images and facts) can be freely used under Attribution-ShareAlike license, unless stated otherwise. Cite this article:
Techniquest Facts for Kids. Kiddle Encyclopedia.