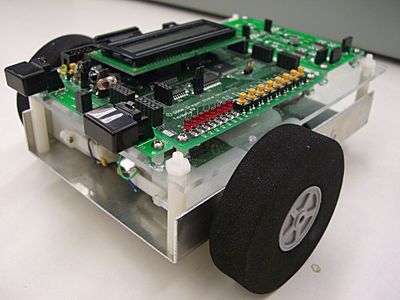 A TekBot equipped with the Atmega 128.2 microcontroller board.

TekBots are programmable robots used by several universities to help students learn some of the fundamental concepts that are found in the fields of computer and electrical engineering.

TekBots are centered on the Atmel microcontroller platform. This is the "brain" of the robot as it controls the robot's two motorized wheels allowing it to move. The robot's controller boards, wheels and all other peripherals are housed in an aluminum base.

At most of the colleges the TekBot is used in an introduction to the electrical engineering course. At Oregon State they are used as a platform for learning in 10 classes. At Nebraska they are used in three classes in combination with the Mega 128 microcontroller. Also at Rochester they are used in digital logic courses as well as the microprocessor and introduction classes.

Both Nebraska and Oregon State combine the TekBot in integrating a freshman mentoring program.

Many senior design projects at Oregon State are completed with the TekBot. An example was the Tekway, a Segway built using TekBots brains.

All content from Kiddle encyclopedia articles (including the article images and facts) can be freely used under Attribution-ShareAlike license, unless stated otherwise. Cite this article:
TekBots Facts for Kids. Kiddle Encyclopedia.