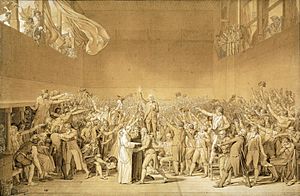 Sketch by Jacques-Louis David of the Tennis Court Oath. David later became a deputy in the National Convention in 1792

The oath was a pledge signed by 576 members out of 577 of France's Third Estate and a few members of the First Estate on June 20, 1789 in a tennis court near the Palace of Versailles.

The meeting hall of the Estates General had been locked accidentally, but the Third Estate thought that this was an invasion of their rights, and were very angry with the king. They stood in a nearby indoor tennis court. They swore an oath that they would not move until "the voice of the nation was heard" and their demands were met. They were joined by the nobles and clergy. 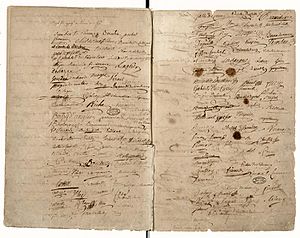 The vote had always been taken by class, and usually, the clergy and the nobility voted to support whatever the king wanted, so the vote of the middle class did not matter. The middle class argued that voting should be "by poll" not by order, because they had more representatives than the first two estates combined. They also wanted the Estates General to meet as one body, so that voting would be by poll, rather than by class.

A week later, the king agreed and the Estates General met as the "National Assembly".

All content from Kiddle encyclopedia articles (including the article images and facts) can be freely used under Attribution-ShareAlike license, unless stated otherwise. Cite this article:
Tennis Court Oath Facts for Kids. Kiddle Encyclopedia.