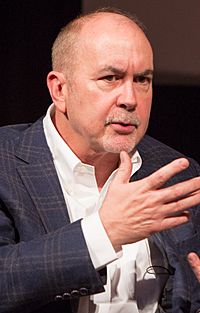 Terence Patrick Winter (born October 2, 1960) is an American screenwriter and producer. He is the creator, writer and executive producer of the HBO series Boardwalk Empire (2010–2014).

Winter is also known as a writer and executive producer for the HBO series The Sopranos, from the show's second to sixth and final season (2000–2007). He wrote the screenplay to Martin Scorsese's The Wolf of Wall Street (2013) for which he was nominated for an Academy Award for Best Adapted Screenplay. He co-created HBO's Vinyl, which ran for one season in 2016.

Winter was born in New York City. He grew up in Marine Park, Brooklyn.

All content from Kiddle encyclopedia articles (including the article images and facts) can be freely used under Attribution-ShareAlike license, unless stated otherwise. Cite this article:
Terence Winter Facts for Kids. Kiddle Encyclopedia.