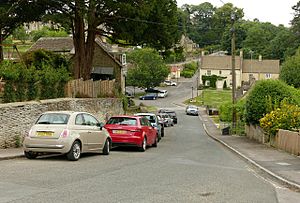 The Tetbury Woolsack Races are held on the Whitsun Bank Holiday Monday. Hundreds of people line up along Gumstool Hill (an extremely steep street) in the centre of Tetbury, Gloucestershire to watch the teams. Each competitor must carry a full woolsack on his / her back and race either up, down or up and down the hill.

The races take place between two public houses, the Royal Oak (the bottom of the hill) and the former Crown (at the top). People can take part either as individuals or as part of a team. The individuals race up the hill, the teams (with 4 members swapping places at each end of the course) race up and down the hill twice.

The men race with a 60 lb woolsack, ladies have 30 lb. There are also youth races where boys ages 16–18 races with a 30 lb sack and a children's class. The weight of the children's woolsack isn't specified but it's probably about the same as a pillow.

All content from Kiddle encyclopedia articles (including the article images and facts) can be freely used under Attribution-ShareAlike license, unless stated otherwise. Cite this article:
Tetbury Woolsack Races Facts for Kids. Kiddle Encyclopedia.