Tetbury is a small town and civil parish within the Cotswold district of Gloucestershire, England. It lies on the site of an ancient hill fort, on which an Anglo-Saxon monastery was founded, probably by Ine of Wessex, in 681. The population of the parish was 5,250 in the 2001 census, increasing to 5,472 at the 2011 census.

During the Middle Ages, Tetbury became an important market for Cotswold wool and yarn. The Tetbury Woolsack Races, Founded 1972, is an annual competition where participants must carry a 60-pound (27 kg) sack of wool up and down a steep hill (Gumstool Hill). The Tetbury Woolsack Races take place on the "late May Bank Holiday", the last Monday in May each year (27 May for 2013).

Notable buildings in the town include the Market House, built in 1655 and the late-eighteenth century Gothic revival parish church of St Mary the Virgin and St Mary Magdalene and much of the rest of the town centre, dating from the sixteenth and seventeenth centuries. The Market House is a fine example of a Cotswold pillared market house and is still in use as a meeting place and market. Other attractions include the Police Bygones Museum. Chavenage House, Highgrove House and Westonbirt Arboretum lie just outside the town.

Tetbury has won five consecutive Gold awards in the Regional "Heart of England in Bloom" competition in 2006, 2007, 2008, 2009 and 2010 and was category winner "Best Small Town" in 2008, 2009 and 2010. In 2010 Tetbury was Overall Winner of Heart of England in Bloom and won a Judges Discretionary Award for Community Achievement. Tetbury won Silver Gilt as a first-time entrant in the National Britain in Bloom Campaign in 2009 and a second Silver Gilt in Britain in Bloom in 2011. 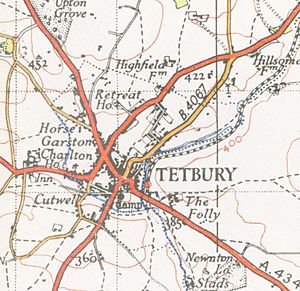 Tetbury is situated in a landscape of gently rolling hills primarily used for farmland, including grazing of sheep and grain production. Its location is associated with a nearby major east-west trade or drovers trail, which would account for its early importance as a wool trade centre. Nearby to the west are Owlpen Manor, Beverston Castle and Calcot Manor. The Tetbury Avon, a tributary of the Bristol Avon, known locally as the Ingleburn rises to the north of the town.

Tetbury Air Cadets unit is based in the grounds of Sir Williams Romney's School.

The People's Pod is a youth club for 11- to 16-year-olds, it is located in the Recreational Centre.

Tetbury Town Youth Football Club is located in the Recreation Ground for children aged 3 to 16. 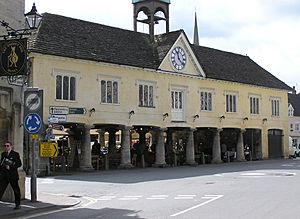 Tetbury has bus services which serve local towns. Tetbury railway station closed in 1964, and the nearest railway station is now at Kemble; the nearest major airport is Bristol Airport. General aviation uses Kemble Airport at Kemble. The former airfield at Long Newnton (1 mi southeast of Tetbury) was originally the home of the Cotswold Gliding Club, which has since moved 6 mi to the north to Aston Down.

Tetbury is on the A433, with easy access to the M4 and M5 motorways. The A4135 originates in Tetbury and proceeds westerly through Beverston.

All content from Kiddle encyclopedia articles (including the article images and facts) can be freely used under Attribution-ShareAlike license, unless stated otherwise. Cite this article:
Tetbury Facts for Kids. Kiddle Encyclopedia.